or...
why I hate "Agile" as it's perceived today
and what does Agile mean to me


I'm a well-known anti-Agile pundit when it comes to enterprises: sometimes I literally can't help to not ridicule people taking it seriously. I'd like to state the reasons why.

In the late 90s, software development was in a - usual - crisis: projects didn't get done. There were a lot of people praising about how RUP or any other process would be better, and they tried to fulfill process criterias instead of solving end-user needs.

People simply had enough of this: they wanted to improve the World.

Nowadays, I hear the following excuses:

Also, "we" deliver each sprint - except the term "delivery" for me has much more means than pure deployment of a new version which passes all the active tests.

I mean, seriously: what is it, if not processes over people?

It's just an example, albeit a pretty serious one; my other favourite is non-colocated standups over phone, especially when it's made sure that people have distinct set of capabilities and they don't want to touch each other's stuff anyway; or when it doesn't matter if we advance or not.

Agile, for me, was some kind of rebellion against a world with no sense, like this one.

One should recognize, that a large organization needs processes; we're only free to choose which one we implement in an organization. Some roles are built-in: you could call your managers product owners, if they still do sign your timesheets. Make sure that your way of thinking has respect of your realities.

It's strange that all project methodologies seem to become famous on what they never wanted to be:

Being or not being Agile is not the problem, especially when it comes to following or not following certain practices. These are tools. Not always applicable. If your problems don't fit, if these are not your problems, or if they won't work in your environment, don't use them.

Being Agile for the sake of being Agile is the least Agile thing you could ever-ever came up with.

Posted by Aadaam at 2:56 PM No comments:

I was tutoring for years, and if there's something I miss at my current workplace is the students around me: they were an inevitable part of my teams since january 2005, until I left EPAM last summer.

(Please note: these guys were mostly at their first or second workplace, and still doing university: in Hungary, it's common that young software engineers are taken as full- or part-time employees while still studying.)


Working with students is hard. It's hard because even if they know the theoretical answers, and didn't forget them right after passing the exams, it's not yet burned into their brain with "learning-by-doing". They're not confident enough to work in an elegant way.

The Beauty of MVC

The widely-known Model-View-Controller pattern was published first in 1988 (by Krasner & Pope). It was originally indented to represent user mental models and so on, and while some people may want to superseed it with new paradigms, today I want to talk about its beauty.

Because MVC not [only] models the user's mental model, it models the world.

It's nothing else, than a practical implementation of Hegelian dialectic.

Let's start with a simple scheme. The user sits besides a computer. [S]he looks at the monitor, while trying to achieve something by pressing buttons on the keyboard, or trying to wander around with a mouse or on a touchpad.

Generally, we don't really distinguish between the different input peripherials with MVC. The monitor is the output, other human-computer interface peripherials are for input, it's that easy: 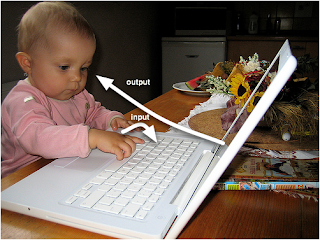 (Based on image of flickr user ntr23 under Creative commons license)

Basically, there are two schemes of javascript callbacks:


where callback is called with:

What if we would choose the first one, but instead call them differently?

I came to a level, with some helper functions:

Posted by Aadaam at 2:36 PM No comments:

Recently we have seen a rise of "designers" in engineering practices, particularly software engineering. While visual designers and artists were always present in every engineering field - the frescos weren't painted by the architects of the basilicas most of the time - it's strange to see opinions of software engineers taken as "they don't understand design anyway"

Because software IS design.

Our thoughts are explicit, because the computer can think only one way.

Our thoughts are consistent, at least, from the computer's perspective. Non-consistent thoughts get a so-called syntax error, and would never start on the user's machine. Any inconsistency means the literal crash of the program.

Design in software engineering is the blood-swearing process of getting an idea consistent and in harmony to its environment.

What surprises - and saddens - me if I get a "design" document from a designer which clearly wasn't distilled this way what we call design.
Posted by Aadaam at 1:56 PM No comments:

If we speak about people who shaped informatics / software engineering, we cannot forget "the father of information age", Shannon, who died nearly exactly 10 years ago, on february 24th, 2001. One of his writing was claimed the "Magna Charta of the Information Age" - and probably this essay shaped our present much more than the now 10 years old other "Magna Charta".

Without him, we may not be able to listen to CDs or MP3s, or make phone calls on our mobile, let alone connect to a WiFi network.

But who was this guy?

The case of the wise flamer: In Memoriam Edsger W. Dijsktra

If you go to my desk at my current workplace, you'll find a bunch of books on top of each other. As of today, the topmost of them is a hungarian edition of Structured Programming from Ole-Johan Dahl, Edsger W. Dijsktra and Sir C. A. R. Hoare, which was published originally in 1972, although the articles in it are much more older.

Most people would have think that a book from 1978 has nothing to say about our current affairs. Nothing could be further from the truth. In fact, those things which stand for nearly 40 years might be the ones that are universal to our profession. Do believe me, a lot of things do!

On one side, Dijsktra could easily be one of the greatest flamers you've ever met. It's enough to look at this article about programming languages from him - don't forget he got a Turing award for his achievements in that field! - to know what I'm speaking about.

Most of people will remember him by the Dijsktra Algorythm, maybe the disappereance of the Goto statement from modern programming techniques. Not that subsconciously we wouldn't use a lot of his findings when we're writing programs.

One of his greatest misunderstandings I believe was about his rejection of versions, and version control systems. He said in an interview in 2001 that "[programs have version numbers] even with decimals like version 2.6 or 2.7, that's nonsense; while version 1 should have been the final product". He didn't see the need of tracking changes of a software, as they were to be implemented only once, perfectly.

He even wrote his articles this style: on paper, by hand.(In fact, he used a kind of blogging sometimes I'm tempted to use this way :) He gave photocopies of these handwritings out to friends and collegaues, who may have distributed it themselves.

Never forget that he was the strongest advocate of TDD in the early 70s, when Kent Beck, the inventor of unit tests was most probably still occupied by more childish stuff (born in 1961.)

Still, I do believe that his mistake was based upon the perception that customers, or whoever is to order the software from computer scientists - he used this title consequently - had a perfect, clear idea of how the product should look like, even if expressed vaguely. Maybe later we will be able to return and reveal the truths behind this platonian thinking, still it's probably not the way most our industry experiences software specification on a day-to-day basis.

(I do believe this thought has some base to stand, although I feel myself too weak and early to prove its pillars unfortunately)

Another of his mistake was that he didn't count on the externalities: it may be that the environment of the system changes aggressively in the lifetime of the product, wether it be development or production phase. For new needs, one must respond with a set of changes, the quickly the better (or at least faster than the competition does).

Also, it may be that our users have different needs than we may have thought: although we have scientific measurements to prevent this, as with social sciences, there's always a large area of mistake or unexpected things to happen.

His style sometimes makes it harder to understand the deep messages behind his writings: truly a genius of his age, Dijsktra was able to form our just-born-then industry, yet his findings may have much more long-term effect than we would be able to perceive, even today.

So, go and find some of his influental papers and interviews, maybe even those linked in this article. Then think about it: what if the really important things are to stand regardless of the centuries, even if a flamer says them first?